Our election outlook (or why elections don’t matter)

Home » Our election outlook (or why elections don’t matter)

The July 2 Australian Federal election will be of great interest to many of our clients. In truth, in the same way the country appears split down the middle 50/50 between Mr Shorten and Mr Turnbull, so too are Quantum Financial clients.

At Quantum Financial we normally walk a narrow path right down the middle between the parties and do not presume to offer our clients a view on who should be elected. In our role as professionals, we will always work constructively with both sides of politics in order to further professionalism in financial planning. However, this year we will make an exception.

A question we are often asked is what impact a change or return of government will have on markets. As a general rule, since the Reserve Bank was granted independence to set interest rates by Treasurer Costello, we don’t think politicians have much of an influence on markets at all. Below we show the Australian share market after the 1983 election in red (change from PM Fraser to PM Hawke) and the 1996 election (change from PM Keating to PM Howard).

From the average market return post election below it would appear there is a market rally following a change of government but the sample size is relatively low (we don’t change governments often!). The run up to an election could be interpreted as a period of uncertainty with softness in market returns. If you look at returns after this period they then fall back. If you try to read these tea leaves, we think it’s a massive stretch to claim any causal link between election cycles and market returns. 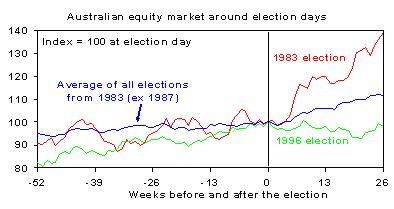 Despite the 50/50 current split between the leaders (with allowance for a +/- 3% margin of error), we believe by the end of the election campaign there will be a clear leader who the public will shift towards, making it unlikely we have another minority coalition government.

Another way to look at it is to examine the market returns 3 months prior to and 3 months after the election of a leader (ie over a 6 month period). We show this analysis below: 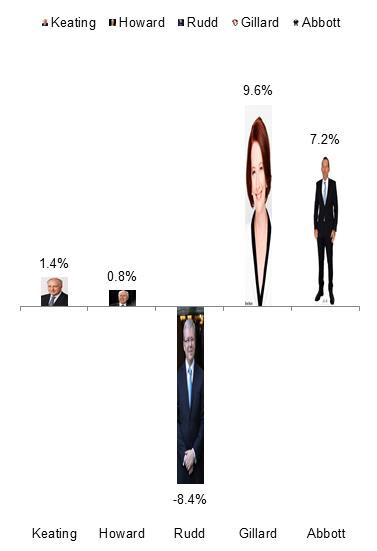 We believe the above shows that it’s hard to draw any sort of conclusion that elections influence markets in any consistent way. Partisans on both sides may look for causal market effects re Rudd, Gillard or Abbott above but remember Rudd’s ascension occurred immediately prior to the Global Financial Crisis (GFC) while Gillard’s and Abbott’s ascension coincided with the ongoing market bounce-back from the GFC.

So in our opinion, regardless of who wins the election, the economic sky will not fall in. Our favourite examples of this are Belgium which had no government for 535 days from 2007 and Australia in 2010 where we had no government for 17 days. In both cases the countries did well economically regardless of the lack of politicians running the joint. This can lead one to question whether we should enjoy more politician free periods?

Perhaps just as importantly as the passion, loathing or indifference you may feel for one or both of the party leaders, they both have amazingly talented and inspiring wives who should be role models for our daughters and grand-daughters. One is the daughter of former Australian Attorney General, Tom Hughes AO QC, while the other is the daughter of former Australian Governor General, Dame Quentin Bryce AD, CVO. 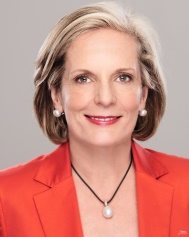 Lucy Turnbull (nee Hughes) AO is a successful businesswoman, lawyer, philanthropist and the first female Lord Mayor of Sydney. She is Chair of the ASX listed company Prima Biomed and has a background in investment banking. 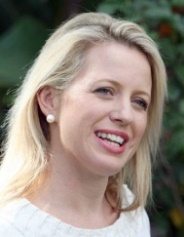 Chloe Shorten (nee Bryce) started her career in journalism before transitioning to marketing and communications had a successful career in corporate relations in the resource and technology sectors. She is currently Head of Corporate Affairs & Stakeholder Relations for the engineering firm Calibre.

So in 2016 at Quantum Financial we nail our political preferences to the mast: Vote 1 Lucy and Chloe!

Not only is Claire very personable, she’s a lovely person and easy to talk to.

Their advice is sound and well researched; as people they are pleasant and friendly as well as professional.